Like every other gardener I know, I love to try out new plants. And, lucky me; I get to call it part of my job!

Here are some promising new plants we’ve been growing this year in my Springville garden. Some of you may have been growing these already, but they are new to me and I haven’t seen them in any gardens or local nursery centers…yet. We’re propagating and growing all of them to try them out in more gardens. 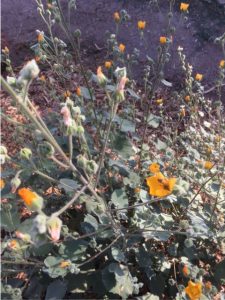 it won’t survive below 25 degrees Fahrenheit or frequent frosts, so this plant is best in a warm, low-elevation garden or protected by a wall, boulders or rock mulch. It originates in desert slopes and washes below 2500 feet in California, Arizona and northern Mexico. I planted it last fall in my foothill garden at an elevation of 1000 feet and, perhaps partly because of our warm winter, it was not damaged by frost. I have it planted on a southwest slope and mulched with wood bark and on a drip system deep watered about once every two weeks or so, with additional underground water from upslope irrigation. It has been putting on a huge show of orange/apricot flowers the last few weeks especially. The bees have been greedily harvesting the pollen. The leaves are a soft grey-blue-green with fine downy hairs (not stickery). I haven’t done any trimming yet, although the literature says I should be pruning it while young to keep it from getting rangy. It’s always great to have a plant that looks good all summer on very little water and then blooms profusely in fall, don’t you think? In addition to pairing it with other California low-water-use plants, including some Ceanothus varieties, you could also plant it with non-native sage like Mexican bush (Salvia leucantha) and Autumn (Salvia gregii) as well as cacti and sun-loving succulents.

On the same southwest facing slope, I also planted several buckwheat. They all did fine their first winter in the ground, and at least two of them did great all summer on the same water regimen as the mallow. I’ve been looking for additional buckwheats for the garden, and the Saffron (Eriogonum crocatum) and Ashyleaf (E. cinereum) are promising.

different soils and aspects. Many of the coastal buckwheats can’t tolerate our summers in full sun, so I gave them the harshest aspect I could to see if these buckwheat would tolerate our intense summer heat. They are both looking great going into fall.

The third buckwheat I planted is Longstem or Wand Buckwheat. The literature says this one should be a winner, climate-wise, but so far I think it’s a plant for those who love buckwheat and/or odd-looking plants. So, of course I love it! It has tiny flowers on long stems that rise above a base of foliage that, at least in my garden, has turned quite gray and dry

looking. But the plant is still alive; I can see tiny leaflets forming again, so it has earned its reputation of being drought-stress deciduous, which isn’t necessarily a bad thing, but must be planted in a place where you don’t have it focus on it at the end of summer (which is the way we treat bush lupin too). It looked great through winter, spring and mid-summer, though, with very pretty pink and white flowers. And it’s true, pollinating insects like it, just as they are reputed to love all buckwheat. We’ll try this in a few other gardens and see how it works out.

Desert Sage, Great Basin Sage, or Purple Sage. This is the “Riders of the Purple Sage” plant. It has a delightful minty, almost addictive sage scent when you crush the leaves. This is another blue-flower sage, and is a small shrub with light green foliage. According to all the experts, it really must have a dry sunny site with little water in the summer and great draining soil. Again, this is planted on my southwest facing slope with wood mulch and drip irrigation. You could also plant it with manzanita, juniper, baja fairy duster, yucca and mallow in a rock or semi-desert garden. It should be able to withstand our winters as long as the soil will drain. If you don’t have gravelly loam as I do or sandy loam at least, plant this one in a large container with a cactus mix. Worth a try if you love old westerns or want variety in your pollinator garden.

What new plants are you excited about this year?