In Love with Spiders

I admit it: I love spiders.

When people post on social media their “Ick” and “OMG” reactions to spiders in the house, garden, barn or garage, all I can think is “cool.” I admit to killing a few black widows, knowing that re-location does not work well with them, plus I’ve already been bitten more than a few times and, well…do I have to explain further?

I’ve also vacuumed up more than a few cellar spiders (daddy long legs), which is probably particularly cruel since they do so much good catching flies and gnats in the house, and then I suck web, carcass and live spider right up. I’m pretty sure I’m not alone, either in killing spiders, or in loving them. We humans are, if nothing else consistentl 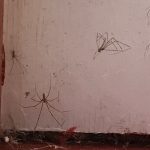 y, hypocrites. I could justify my arachnid killing sprees with the fact that the most common cellar spider in California is an invader from Europe. In fact many common spiders in California are immigrants from elsewhere. They probably didn’t choose us, but got trapped in clothing, luggage, cargo, animals, and food products, usually brought in by individuals, not commercially.

Most spiders that appear in my house get relocated outside. I tend to leave the hunting spiders like wolf spiders, crab spiders, and the common (also from Europe) Longlegged Sac Spiders, alone. They don’t build webs and hunt by walking around and eating whatever they come across (I’m sure they are stealthy and smart about it), but I’m too big to be interesting to them, and I think they’re cool-looking.

I do love spiders.

What’s not to love? They’ve been around since at least 300 million years. There are over 40,000 species in the world. Spider webs are stronger than bone and almost as strong as steel. Spiders can create up to seven kinds of web silk, each with a specialized function. Scientists think there may be treatments for Alzheimer’s disease, cardiac arrhythmia and stroke in some species’ spider venom. All spiders bite and all have venom, but deaths from spider bites are extremely rare. And as I’ve attested, it’s quite possible to be bitten by a widow and have no lingering effects for more than a few hours or so.

People who love spiders often tout these human uses for them, but as a vegan I try also to ad

mire a life form not for its usefulness to me, but on its own merits, even if the merits might be a mystery to my still-learning human brain. Gardeners love spiders for the way they eat pest insects. But spiders are generalizers; sometimes they eat bees and lacewings and ladybug larvae too. They do pretty much what all living things do: they are born, they eat, they mate, they give birth, they raise their young; they die. Some of them die early; some of them die violently, by being eaten or by being smashed or sucked up by a vacuum.

In some species, females would rather eat than mate with the male. They are choosy, in ways scientists haven’t figured out yet. Males do elaborate rituals to calm females down enough to mate, and sometimes they wait around until the female is weak from a recent molting. Sperm is often just placed on the web and the female retrieves it. Sometimes she retrieves it and still eats the male. In some species, the female dies as soon as she lays her eggs, or when she sees the babies emerging. Most of us have seen the thousands of babies emerging or still near the egg sac. They are born as miniature versions of adults (unlike insects, spiders don’t go through metamorphoses). Most of the babies die before reaching adulthood, for lots of reasons. The average life span of a spider in the wild is three years. Often in captivity, they live longer, and scientists think this because they rarely mate in captivity, and mating, as you can see, often means death to either the male or the female.

Spiders are a natural part of a garden. You may justifiably not want them in or just outside your house. But they are part of the balance in a garden. Just when I think everyone surely by now agrees with this, I encounter another well-intentioned (I prefer to think this) homeowner who believes the best garden has no spiders. “Because they can bite.” That usually means pest insects must be “controlled.”

Which is usually code for non-specialized pesticide use like Carbaryl, which is toxic to everything including your children and pets, and is classified as a likely human carcinogen. It is this chemical, and not spiders, I say “Ick” about.

Instead of thinking we are better off doing it alone, can we ask for help, accept it when offered, respect the needs of our allies and relax? Allergies to spider bites are about as common as to bee stings, and

of course if you or your family members have a true allergy, you are going to be justified in being more cautious wherever spiders or bees are to be found. Babies and young children are more prone to reactions even when they are not allergic since their immune systems are still forming. Spiders are mostly shy; they don’t generally jump out and attack, although the Lynx spider can spit venom a few feet. Don’t over react; the venom is not poisonous to humans. It’s designed to keep birds or other spiders away.

Allowing spiders to be born, live, mate and die in the garden in their mostly hidden, mysterious way is part of the low-maintenance method of gardening. This method includes plants that are suitable to the climate, many of them native. These plants generally thrive with the least human interaction (aka work) when they can and do host a variety of other creatures, including spiders. Wear gloves, observe, be ready to spot, be humbled, and to respect a whole world living just beyond our understanding. Be ready to be amazed.