Late-winter is one of my favorite seasons in the garden.  Plants that were dormant in summer and fall look refreshed and green now. One of 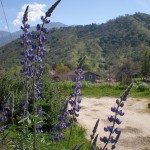 the showiest is silver bush lupin (Lupinus albifrons), with great stalks of purple or pink flowers that you can see from a distance. Bush lupin like to grow in colonies, and each bush may be short-lived, but the collection remain strong. A lot of native plants are like that.

Our native coral bells (Heuchera) include the Canyon series, (Duet, Bells, etc.),  plus “Opal,” and “Wendy,” and island alum root (Heuchera maxima.) They are especially valued for their cottage garden-pink flowers in late winter and early spring. 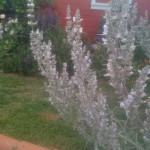 Often overlooked are our native cool-season bunch grasses. We often think of cool season grasses as the escaped pasture grasses that turn into foxtails. But California used to be covered more by purple needle grass (Nassella pulchra) and its cousins nodding needle and foothill needle grass, plus California fescue, the gramma grasses (side oats and blue), onion grass (Melica californica and M. imperfecta), June grass (Koeleria) and the three-awn grasses (Aristida). Most of 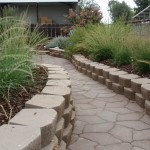 these can only be found at specialty nurseries, but are worth adding to the garden for interest and habitat value. They also provide a strong vertical form and can be kept at least a little green all summer with added water. These are not turf grasses, but should be used as you would other perennials and small shrubs. 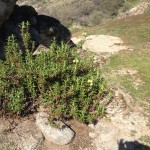 Our local yellow bush monkeyflower will soon be blooming from its precarious perch among boulders in full blazing springtime sun. When planting in the garden, try to mimic nature and place where the drainage is excellent, as in a rock garden, and where it, like the bush lupin, can be allowed to go dormant in the summer. Hybrids found in nurseries can tolerate a little more water or require a little more shade. Monkeyflower (Mimulus or Diplacus) can be tricky in the garden, but well worth the effort if you can provide the right conditions.

The two buckwheat that are most successful in central valley and foothill gardens are California (Eriogonum fasciculatum) and sulfur (E. umbellatum). They bloom in mid to late spring. California buckwheat is a large shrub suitable for steep slopes or foundation planting. Its flowers go from white to pink to rust over a long season. Sulfur flower is named because of the color of its flowers. A real show-stopper in the spring garden. Many pollinators and beneficial wasps use buckwheat, so it’s a must-have in the habitat garden.

Cleveland sage is a popular shrub for many reasons, but at the top of the list are the flowers. Deep purple or blue, depending on variety, the flowers form in whorls along stems that cover the tidy round shrubs. Easy to grow and manage, this sage can also be used in the kitchen, and the flowers hold color for months.

Margarita BOP Penstemon works well in our area, probably because it is related to our own local native foothill penstemon. Blue eyed grass, native iris, California blackberry, Desert willow, Carpenteria, and manzanita are just some of the many more spring-blooming native plants. Annual wildflowers can also be great fillers and add diversity of bloom to your garden. Try Clarkia, tidy tips, desert blue bells and tomcat clover in addition to California poppies. You can also search out native bulb sources for that special extra. Easy to grow bulbs include “pretty face,” and wild hyacinth. 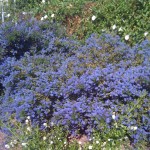 Finally, there is California lilac (Ceanothus.) Most of the California lilacs bloom in mid-spring in dazzling shades of blue. Some of the best for our area are “Concha,” “Joyce Coulter,’ and “Ray Hartman.” They are very finicky about being over-watered in the summer, so are best planted after you’ve spent some time getting to know the natives.

Spring is around the corner. With all the rain we’ve had this winter, I think we can plan to be dazzled!